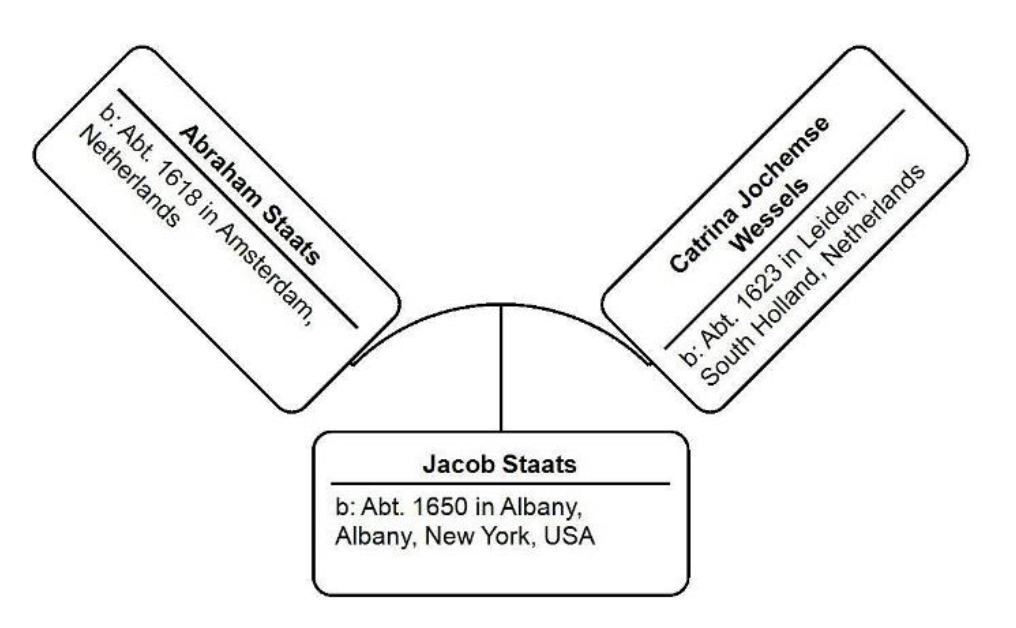 Jacob Staats was the son of immigrant ancestors Abraham Staats and Catrina (Tryntje ) Jochemse Wessels. For information on his parents, please click on the Fan Chart to the left.

From: https://exhibitions.nysm.nysed.gov/albany/bios/s/jastaats4595.html
By Stefan Bielinski

As was mentioned, he was the son of New Netherland pioneers Abraham and Tryntje Wessels Staats. His generation of American-born children firmly established the Staats family in colonial Albany and beyond.

As the eldest son of early Albany’s most prominent physician, Jacob Staats became a surgeon as well. He probably took over his father’s practice, served the Albany garrison, and treated patients at the behest of the Dutch church. Like his father, he owned a Hudson River sloop—Trinity—but he too was primarily a surgeon, serving his neighbors, soldiers, and those sent to him by the church.

By 1679, he was identified as an Albany householder. He owned a number of other parcels within the city as well. This Albany mainstay also served city government as assessor, assistant, and alderman for the First Ward.

Jacob Staats married twice. His first wife was Ryckje Ulrica van Dyck. Their children were baptized in the Albany Dutch church where he was a member and one-time deacon.

Jacob and Isabella lived together in their First Ward home for the next two decades as Albany evolved from its frontier phase into a regional center.

Jacob Staats filed a will in September 1734 calling himself a surgeon of Albany city and that he was “very sick.” Jacob’s extensive estate was divided among his heirs.

Jacob Staats died in February 1735, and he was buried from the Dutch church.